I have just released the version 1.2-1 of the Rarity package, and this new version introduces a new function to make what I called “correlation plots”.

These correlation plots provide a synthetic and convenient representation of the correlation between 2 or more variables, allowing an easy analysis. 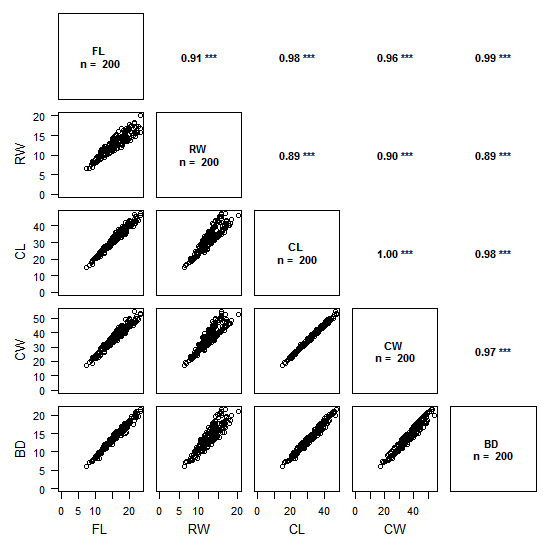 The above figure is an example with data of crab sizes (from the package MASS).

The plot is split in two:

The degree of significativity is as follows:

The plot is read by crossing pairs of variables as if we were reading a contingency table: for example, the top left scatter plots shows RW as a function of FL, and, on its mirror on the upper triangle is the value of the Pearson correlation coefficient (0.91), with its significativity (p < 0.001).

To create this function I largely took inspiration from the plot on page 3 of the Supporting Information of Kier et al. 2009.

The use of the fonction is fairly simple. It requires a data.frame with variables in columns, the choice of the method and voilà. The methods are:

Here are a couple of simple examples with 2 variables (although this function is really interesting for more than two variables!):

Many thanks to Ivailo Stoyanov for his suggestions to improve the function.

Corrected and up-to-date on the CRAN!